Raguva is a township in Aukštaitija, ca. 30 km south-east of Panevėžys. In World War One, during the battle of Kupiškis, it was taken by Division Beckmann on August 2, 1915.

During the German withdrawal from the East at the end of 1918, troops of the Red Army appeared in Raguva area in early January 1919 and were evicted on May 19 by a task force led by Capt. Spranger of Saxonian Frw. Regiment 18 which was supporting Lithuanian troops.

In the czarist period, Raguva had had a post office (Rogovo) but none during the German occupation. A Soviet postal facility was opened during the brief Bolshevik period but there is no surviving evidence of its services. In charge was a professional G. Bedorf who (Jurgis Bedarfas) later was appointed by Pašto Valdyba to establish a post office in Ukmergė.

For stamps, Raguva was supplied with Fourth Berlin Issue, followed by the Sėjėjas Issue etc. In the absence of a regular postmarker, early cancelling at Raguva was done in manuscript, showing place and date. So far, no other provisional markings have been recorded. 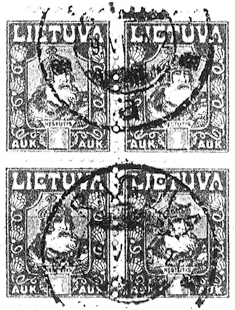