The second and eventually half-century lasting Soviet occupation of the three Baltic States (Estonia, Latvia, Lithuania) in 1944 brought about a significant exodus of the population moving westward, mainly to Germany and to a lesser extent to Scandinavia. The refugees included a considerable number of knowledgeable philatelists who, due to old friendships and new contacts, soon formed the intention of shaping their activities in a more organised manner.

An early manifestation of the strength of the hobby was the decision to arrange a Baltic Philatelic Exposition. It was to be held in the old Bavarian town of Schongau lasting for about a month, from May 12 to June 16, 1946. The event was publicised in the relevant ethnic papers. In addition, a special multi-colour publicity label with the three national flags was also produced. It was meant for sticking on postal correspondence or as a memento generally. 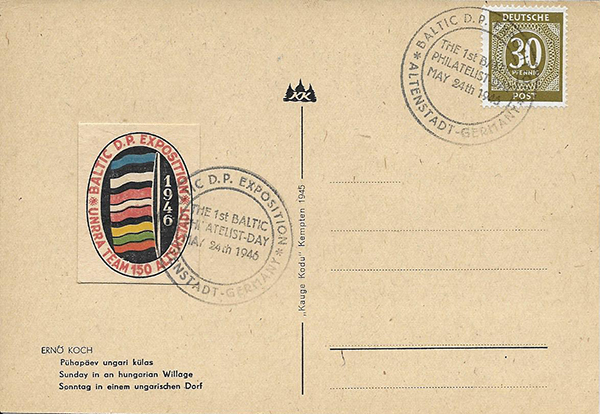 Though the philatelic exposition took on the place name of SCHONGAU, the reality was more complex. The Baltic Displaced Persons Camp, formally designated as UNRRA Team 150, was located not in the town of Schongau itself but in an outlying suburb named ALTENSTADT. In wartime, Altenstadt had been the location of a Luftwaffe [= German Airforce] base with attached barracks housing the staff. After the war, this ex-military area was put to civilian use to accommodate some refugees, the so-called Displaced Persons. It so happened that the space was assigned to the Baltic people who in turn put together its own administration — with understandably limited local authority.

It was in this context that as early as mid-1946 the Baltic DPs organised a modest but impressive display of their culture and heritage. The event included, with considerable autonomy, a Baltic Stamp Exposition as well — after some outstanding collectors from the Baltics had discussed the event and its extent beforehand. For practical reasons the Stamp Exhibition was referred to as SCHONGAU, even if it actually took place outside the town. In fact, the nearest post office was the minor postal facility ALTENSTADT whose name on postal markings in fact carried the subaltern reference “via”: Altenstadt über Schongau. 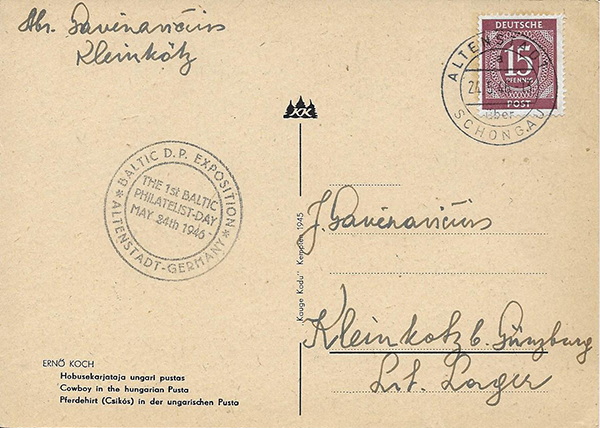 Appropriately, the Baltic Philatelic Exposition was celebrated by the issue of a souvenir-type “postage stamp” which displayed its ethnic nature by the trio of the national coats-of-arms of Estonia, Latvia and Lithuania. Though the stamp had no postal validity in Germany (or anywhere), it stated its nominal value as 30 pfennigs supplemented by a surcharge of 170 pfennigs intended to assist with the costs of the exposition. The stamp was printed in sheetlets of 8 stamps and was on sale at the exposition. The quantity so printed was 2,200 sheetlets amounting to 17,600 stamps. 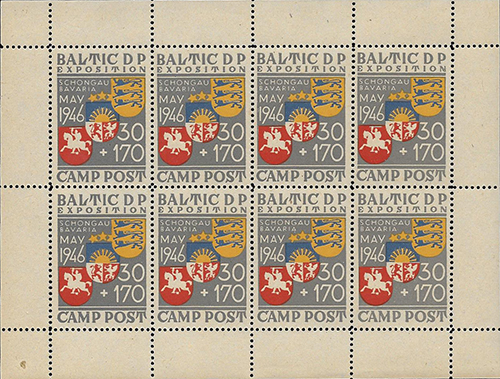 The Exposition stamps (incl. miniature sheets, see below) were printed in Munich, at the “Graphik- und Kunstanstalt Druckerei Bruckmann KG”. Supervision at designing and printing levels was rather lax, resulting in some undestroyed printer’s waste and surving proofs.

The same stamp was also issued in the format of a miniature block, with its nominal price rising to 5 RM. The quantity printed has not been reconstructed with certainty, but at least it cannot be treated as a rarity. 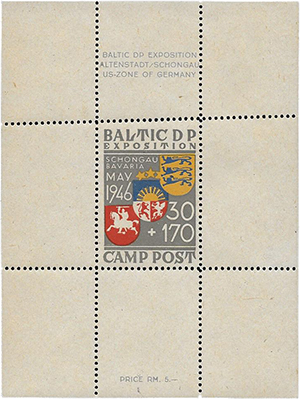 Souvenir stamp in the format of a miniature block

The laxity present at the printing of the sheetlets is also noticeable during the production of the miniature blocks. Obviously rare are the “inverts” where the inscriptions in the margin stand upside down in relation to the stamps. 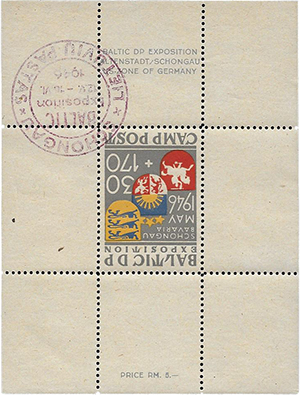 In addition, some printer’s waste and/or proofs are known as well.

Other printer’s waste and/or proofs

At the time of the Baltic Exposition a separate Lithuanian Camp post office was working as well, though its activities were severely limited to the Camp area. In co-operation with the Philatelic Exposition, this Camp post office also produced a commemorative postmark. The view card shown below displays a normal strike in black, whereas the view is of the town of Schongau. 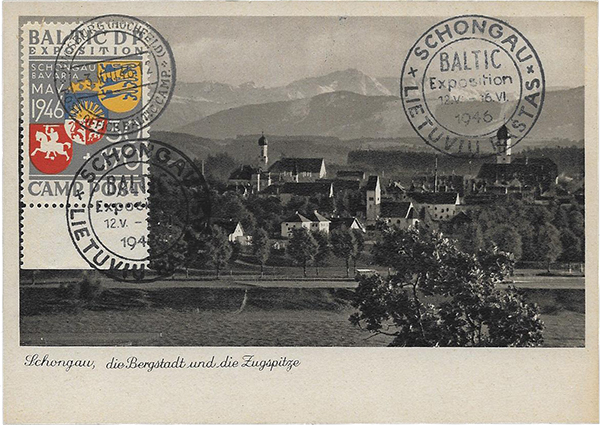 Much rarer is the strike of this postmarker in red colour.

According to recollections of some of the participants, the Baltic Exposition at Schongau was the result of remarkably friendly cooperation of Baltic collectors in exile, especially of the ones with long-standing experience in their home countries. Accounts of the extent of the input of the contributors vary of course and seem to reflect memory filters. But one circumstance stands out: the design and production of the Schongau Exposiition stamps was to a large extent due to the Lithuanian artist Edvardas Krasauskas who was also an ardent collector. After his death in the USA, considerable sections of his Camp Posts collection were acquired by the late Charles Matuzas, N.Y. and Vytautas Doniela, Sydney.

Cover addressed by Krasauskas to himself

One of the by-products of the Schongau Exposition was the happy creation of the Baltic Philatelist Association “Baltia” which was established on July 17, 1946, at the initiative of the notable Lithuanian collector Juozas Liubinskas, sr. The Society embraced a considerable number of knowledgeable Baltic philatelists and so provided a valuable basis for contacts between Baltic and German, later American etc. specialists. One of the Society’s solid achievements was the publication in June 1948 of a multi-lingual “Baltic Postage Stamps Catalogue”. By 1948 “Baltia” had some 300 members and had to its credit several exhibitions as well as regular mainly monthly meetings for discussion and stamp exchange. The Society functioned from Augsburg, also in Bavaria. Below is shown a Member Certificate held by Eugenijus Petrauskas, a long-time editor of the Bulletin of the Lithuania Philatelic Society of Chicago (presently edited by Dr. Audrius Brazdeikis). 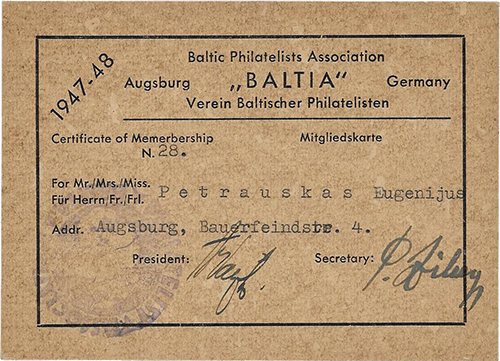