We would like to share recent additions/revisions to these articles by Dr. Vytautas Doniela. These updates are possible thanks to recent findings by Vytautas Jurkša. 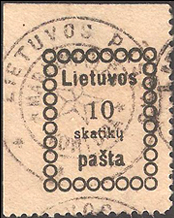 The two-ring cachet with the inscription “LIETUVOS PAŠTAS / MARIAMPOLĖS KONTORA”, with a five-pointed star also found on the First Vilnius issue stamps, most likely as CTO. [Read more]

Later in August 1920 the Suvalkai P.O. was supplied with a regular dated canceller “SUVALKAI” which was in use until shortly before Suvalkai was re-taken by Polish forces on August 31, 1920. This regular Suvalkai cancel can also be seen on singles and sets of the National Assembly Issue (released in Kaunas on August 25, 1920) but it is not clear whether the Suvalkai cancel showing the date 27. VIII. 1920 was applied to a quantity of these commemoratives still at the Suvalkai P.O. or later possibly in Kaunas, after the evacuation of Suvalkai. [Read more]

Please help us to expand and update the Registry of Provisional Postmarks by sending your scans of stamps and covers.