Širvintai (presently Širvintos) is a town in Aukštaitija ca. 50 km north of Vilnius. In WWI, during the German encirclement of Vilnius (which was captured on September 18, 1915), Širvintai  was passed through in early September by troops of Korps Hutier which was flanking Vilnius from the north.

In the immediate post-war period, in 1919 – 1920, Širvintai witnessed a rapid sequence of political and military events. When the German forces withdrew from Russia at the end of 1918, troops of the Red Army came to Širvintai area in early January 1919 but were pushed out by Lithuanian troops (Panevėžio batalionas) on May 7, 1919. A local komendantūra was established as well. However, tensions developed with Polish troops claiming Širvintai as their territory in accordance with Marshall Jozef Pilsudski’s intention to re-establish a greater, confederated Poland. Under pressure, Lithuanian troops vacated Širvintai on September 9, 1919.

During the Russo-Polish war, when military defeats in 1920 forced the Polish forces to retreat  westward, Lithuanian troops re-took some of their lost territory, including Vilnius, and Širvintai was taken back on July 10, 1920.  On Polish military recovery, a major battle developed in the area with Lithuanians conclusively regaining Širvintai on November 21, 1920.

In czarist times, Širvintai had had a post office (as Shirvinty) but none during the German occupation. A mandate, as a temporary postmaster, to open a Lithuanian post office at Širvintai was given to Mykolas Švagžlys as from July 12, 1919. However, the military situation being tense postal work would have been seriously impeded. In fact, the Lithuanian post office was evacuated together with the komendantūra on September 9, 1919. The Širvintai P.O. was re-opened after Lithuanian troops retook Širvintai in the summer of 1920, the new postmaster Jonas Grigas being appointed as from August 1, 1920. In the circumstances, normal functioning would have begun only after the cessation of military clashes and the implementation of a Line of Demarcation, that is, late in 1920.

In 1919, as Širvintai had no regular postmarker to start with, early cancelling was probabaly done in manuscript. Likewise, so far nothing is known about any provisional cancelling after the P.O. was reopened in August 1920. However, Širvintai was soon supplied with a standard calendar-type postmarker “ŠIRVINTAI”. From ca.1930 inscription in postmarkers was amended to “ŠIRVINTOS” which reflected the change in the official place-name.

A regular registration cachet was provided later than the postmarker, so for some time registration was shown in manuscript. 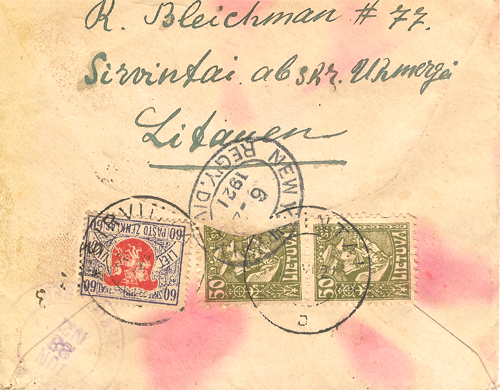