Panevėžys, in Aukštaitija, is one of Lithuania’s major cities and is linked by rail with Šiauliai and Daugavpils in Latvia. In World War One, it was taken by German 1. Reserve-Korps on July 26, 1915. During the German withdrawal from the East, their last volunteer troops left Panevėžys on January 8 – 9, 1919, followed immediately by the 41th Regiment of the Red Army’s International Division. Later in the year and after some indecisive fighting, Lithuanian troops secured Panevėžys from the Bolsheviks on May 23, 1919.

During the czarist period, Panevėžys had a major post office (Poneviezh). During the German occupation it had a branch (Poniewiez) within the civilian structure of Postgebiet Ob.-Ost, also  stationary Feldpost 216. A post office was also set up in Panevėžys during the brief period of Bolshevik rule in the first months of 1919, but so far there has been no surviving tangible evidence.

An įgaliotinis (postmaster) to open a Lithuanian post office, Vincas Bacevičius, was appointed by the Pašto Valdyba as early as January 5, 1919 but due to Soviet occupation was released 10 days later. With Panevėžys back in Lithuanian hands, Kazimieras Venclovas was appointed a temporary postmaster as from May 20, with Vincas Bacevičius later resuming duties as mandated originally. He continued until retirement by his own request and on October 1, 1920 was replaced by Stasys Kaupas who had been postmaster at Suvalkai until its occupation by Polish forces.

According to one account, Vincas Bacevičius opened a Lithuanian post office in the early days of 1919 by taking over the premises of the defunct German P.O. Poniewiez. However, this activity could only have been short-lived, as Bolshevik troops appeared in Panevėžys on January 9. However, the Lithuanian post office opened again in late May (?) 1919, soon after the eviction of the Bolshevik forces. This was feasible because some Lithuanian postal workers had made appropriate preparations while still working at the Soviet postal facility.

While it is possible, it is not certain whether Vincas Bacevičius had any Lithuanian stamps (i.e. the Vilnius Issues) when he first opened in the early days of January 1919. Similarly, nothing is known about cancelling, if any, at that time or other modes of postal marking.

For the re-opening in May – June 1919, stamps were already available having been brought up from Kaunas towards the end of the Soviet rule and hidden at a farm. As can be reconstructed from the available dates, the first stamps on sale were values from Second Kaunas Issue, probably concurrent with Third Kaunas Issue. Moreover, clandestine preparations seem to have included not only the bringing up of stamps but also of a standard postmarker made up for Panevėžys. If this is so, there was no need for provisional cancelling such as e.g. pen-cancelling or makeshift cachets. This would explain why for Panevėžys none have been recorded. 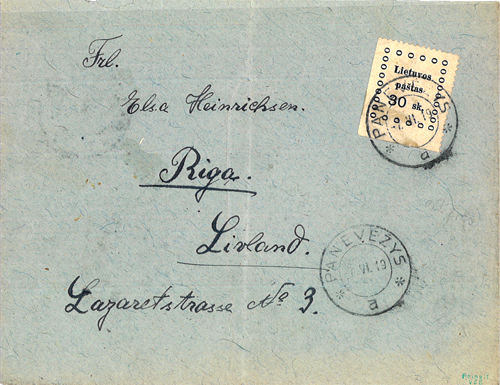 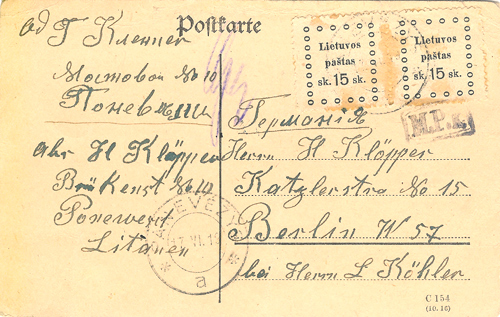 While in possession of a standard postmarker, Panevėžys for some time did not have a standard cachet for registration. This was effected by hand-drawing a rectangular frame. 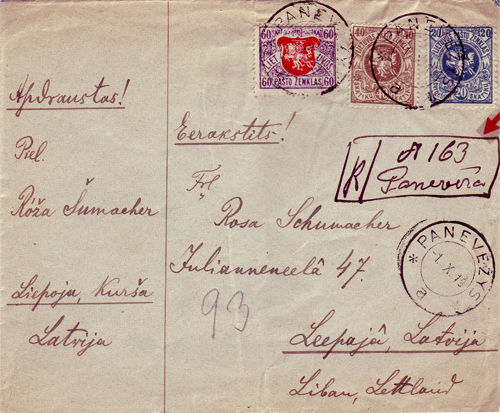 [For a more detailed account of postal complexities, including Lithuanian field post, in Panevėžys in 1915 – 1919 see an article /in Lithuanian/ by Vytautas Doniela, “Paštai Panevėžyje 1915 – 191 metais” in Journal of the “Lithuania” Philatelic Society, No. 235 (2006). The article also refers to reminiscences of contemporaries about postal events there in the first half of 1919.]