The township Nemakščiai (Nemokshty, Niemokschty) is situated on the major highway linking Tilsit and Šiauliai. In WWI, when the German forces advanced into Žemaitija and Courland, Nemakščiai was taken on the very first day of the advance, at 7 pm on April 27, 1915 by Dragoner-Regiment 24 (3. Kavallerie-Division). The town’s importance was enhanced when, in order to improve German military lines of supply, before long a railway line running parallel to the highway was built at great speed.

When the German army retreated from Russia at the end of 1918, the strategic highway and the equally strategic railway line was defended, in early 1919, by volunteer German troops, the Detachement Randow, which was soon incorporated into a major unit, Generalkommando 52. In succession, strict supervision was maintained by various units of the Grenzschutz and, in the latter part of 1919, by poorly supplied and aggressive Bermondt’s Russo-German Westarmee or Zapadnaja Armija.

Nemakščiai had had a post office in czarist times but none during the German occupation. The nearest civilian Postgebiet Ob.-Ost post office was at Kelmė (Kielmy), later at Skaudvilė (Skaudwile). A Lithuanian post office at Nemakščiai was opened by įgaliotinis Jonas Laurinaitis from Kelmė, whose mandate was dated as from August 16, 1919.

For stamps, Nemakščiai was supplied with a stock of Fourth Berlin Issue, followed by the Sėjėjas Issue etc. It also received a small quantity of the 2-year Independence Issue.

Having no formal postmarker to start with, Nemakščiai made do with a makeshift two-line cachet indicating date and place “NEMAKSCIAI”. No other provisional markings have been noted so far. 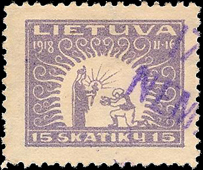 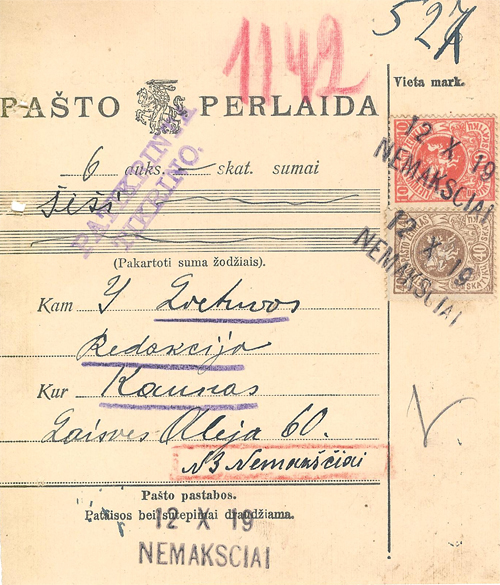 A regular calendar-type postmarker was provided in mid-1920 and was still used as late as 1925, if not later, in a very worn-out state, thus creating the appearance of being some provisional home-made device. 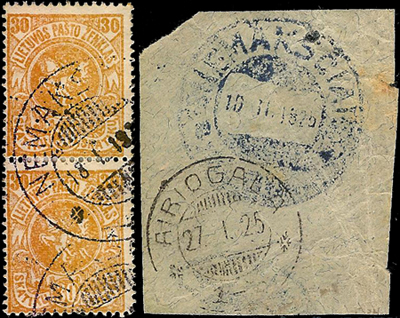